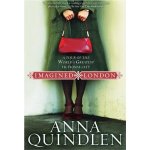 I like Anna Quindlen’s writing: novels such as Black and Blue and essays enjoyed over the years. I have a copy of “Flown Away, Left Behind” tucked into a drawer, have sent another copy to a friend, and just found it again online. And re-read it with swimming eyes, experiencing an empty nest of my own these days: “Sometimes I go into their rooms and just stand, touching their books, looking out their windows.”

I was looking forward to that friendly voice when I picked up Imagined London: A Tour of the World’s Greatest Fictional City. Initially, it seemed as if the task of squaring the actual city with its fictional aspects would swamp Quindlen’s style. There were some wooly asides and tedious blow-by-blow accounts of twists and turns on London streets.

But the book gained momentum as Quindlen shifted from careful synthesis to a more idiosyncratic celebration of her London-based reading, from the sublime (Mrs. Dalloway) to the “middlebrow” (The Forsyte Saga) and even a bit lower (Forever Amber). Certainly, Quindlen’s no snob: “many of us who became Anglophiles in absentia . . . did so originally not through great literature, Defoe or Dr. Johnson, but through mystery stories and romantic novels . . .”

Perhaps this is the type of book that speaks most to the reader when (and because) the experiences are shared. As a bookish girl—without benefit of Google—I worried over the same odd British-isms as Quindlen did: rogering, snogs, rubbers; vests, jumpers, knickers; elevenses and O levels. I, too, am a Dickensian, and enjoyed Quindlen’s tours of Doughty Street (the Dickens Museum) and Southwark (“new London with a vengeance”).

Of course, Quindlen has also had a reading history somewhat different from my own, and that’s an added benefit: more ways to imagine London. One option would be books about the aftermath of World War II, inspired by Quindlen’s notes on that “bleak and hard and unforgiving” time—a time she only knows, of course, due to her reading.

Before I pass along Imagined London with to reader, I had to add a few titles to my reading list: