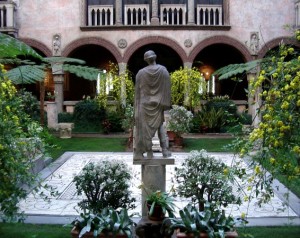 One bitter winter day back in the early 1980s, my boyfriend (now my husband) introduced me to the Isabella Stewart Gardner Museum, on the Boston Fenway. Its granite Belle Epoque exterior was impressive but hardly artistic; I remember its entrance as gloomy and cave-like. Then we emerged into a pleasure dome of tropical foliage, coral and ginger flowers, gurgling fountains, classical statues: the four-story, glass-topped courtyard of the Gardner—a respite from Boston’s ice and grime, and the fulcrum around which whirled a remarkable and remarkably idiosyncratic collection of art and antiquities.

I’ve been a fan of the Isabella Stewart Gardner Museum ever since—long before its profile skyrocketed after the 1990 heist (yet to be solved) of 13 works of art, including a Vermeer, a Rembrandt, and a Degas. It’s a Degas piece called After the Bath—ostensibly part of the Gardner cache—that’s at the center of The Art Forger, the story of an emerging painter who, while skilled in her own right, is also singularly adept at copying the styles of earlier art geniuses. 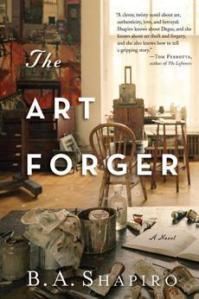 This is a Boston book, replete with details of the city’s neighborhoods and streets—even its subway system, “the T.” As plot developments threaten to overwhelm Claire, the eponymous forger, she takes the T’s Red Line from Cambridge to Boston:

“As the train slithers out of the sooty darkness and over the Longfellow Bridge, the city springs to life, fully formed. Shiny glass towers flood the sky with their interior illumination; the exterior of the State House dome glows yellowy gold. Pedestrians in brightly colored coats flood the sidewalks, and the cars looping down Storrow Drive wink between bare trees. Even with everything on the verge of falling apart, the sight, the pulse, the energy of the city send a jolt of joy through my body.”

While it’s not an “edge of the seat” thriller, The Art Forger is a wonderful way to escape to a place where art, forgery, and thievery meet—where real-life details and the creative embroidering of facts combine for a satisfying read.