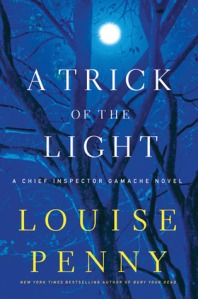 A Trick of the Light opens with a vernissage, the preview of an art exhibition before its formal opening. Patient, kind-hearted, talented Clara—a recurring character in Louise Penny’s crime series—is finally having her big art show at the Musée d’art contemporain in Montréal.

After the preview party, there’s a second party at Clara’s home in Three Pines, the charming little village in Québec’s Eastern Townships, near the Vermont border. Regular readers of the series won’t be surprised when a corpse turns up in Clara’s garden the next day. (Three Pines is quite idyllic, except for its high murder rate.)

Chief Inspector Gamache of the Québec Surété has to break the news about the murder to the victim’s elderly parents. He knows there will be only few moments to glean valuable information about the dead woman before the couple shuts down in grief:

Madame and Monsieur Dyson were gone now. They’d crossed over to that continent where grieving parents lived. It looked the same as the rest of the world, but wasn’t. Colors bled pale. Music was just notes. Books no longer transported or comforted, not fully. Never again. Food was nutrition, little more. Breaths were sighs.

And they knew something the rest didn’t. They knew how lucky the rest of the world was.

The subsequent investigation focuses on two sub-cultures: the cult-like realm of Alcoholics Anonymous (with its official prayer, membership tokens, and “Big Book”) and the tight circle of Québec artists, dealers, and galleries, a “glittery exterior” that masks fear and greed.

The murder must be solved, of course, but along the way Penny includes story arcs that link this book to earlier parts of the series and hint at future developments: detectives who are still in shock over a failed rescue operation, the mystery of who leaked a video of the incident to the Internet, and the ongoing dramas of several Three Pines characters. That continuity of characters and plot lines is what makes a great series so pleasurable to follow.

Penny blends her crime procedurals with a sincere and humanistic consideration of the human condition: why people kill, but also why people demonstrate great kindness, and how they find joy. Asking for, and granting, forgiveness is one of the themes she explores in A Trick of the Light. Another theme is marriage: unions in crisis and others that are safe and successful, like that of Gamache and his paragon of a wife, Reine-Marie.

As always, Penny injects a touch of whimsy, even in the midst of terrible crimes:

Gamache’s eyes adjusted to the dim interior of the bistro. It was warming up outside but still a fire burned in both stone hearths.

It was like walking into another world, with its own atmosphere and season. It was never too hot or too cold in the bistro. It was the middle bear.