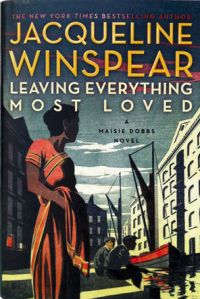 Leaving Everything Most Loved is the tenth book in Jacqueline Winspear’s Maisie Dobbs series set in 1930s England.

Maisie has led a remarkable life, progressing from a costermonger’s daughter sent into domestic service to a nurse during World War I, a student in the emerging field of psychology, a private investigator, and rather unexpectedly, an heiress. Her cases emphasize some of the most pressing social issues of the era: troubled soldiers struggling to return to civilian life; prejudice related to class, gender, and sexual preference; poverty and unemployment during the Depression; and the build-up of Britain’s military complex as another European conflict looms.

In Leaving Everything Most Loved, Maisie’s investigation underscores another prejudice: against Indians living in Britain. When the police fail to find the murderer of an Indian governess, the woman’s brother turns to Maisie for answers. Coincidentally, she has been considering a sojourn in India, to gain “experience and understanding of other cultures.” She is restless in her profession and in her relationship to her lover, whom she cannot commit to marry.

After reading a couple of creative contemporary novels, chock full of cleverness, it was a pleasure to get caught up in Maisie’s current investigation.