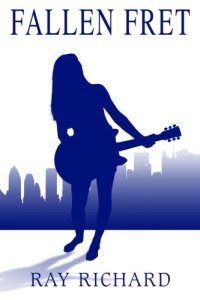 I’m as guilty as the next reader of drifting into ruts, defaulting too often to the same genres, settings, and authors. My book list leans heavily on the nexus of mystery/history/England, with the familiar round of (mostly female) writers well represented. So Ray Richard’s debut novel Fallen Fret was a refreshing change for me.

The main setting is the blues scene in contemporary New York—its clubs, concerts, studios, and haunts. Side trips include a guitar workshop in Arkansas, a blues festival in Maine, a collectors’ lair in Washington state, and a modest concert venue in my own hometown of Fall River, MA. (I’ve enjoyed rock, folk, and comedy at “The Narrows,” but—as yet—no blues.)

I don’t know much about the blues at all, but Richard deftly blends many details of mood, tone, and history into his story. Crisp description and well-placed exposition provide helpful background, and I soon felt at home in this sometimes glitzy, often gritty world of players, fans, wannabes, and hangers-on. Along the way, I effortlessly learned about lossless recordings, one-of-a-kind guitars, the art of string bending, and much more.

Fallen Fret’s plot turns on a point of musical history: did Jimi Hendrix and Miles Davis record an album together? And if so, where is it? Richard inserts one of his main characters, bluesman Chaz Russell, into this mystery. Chaz is a seventy-year-old survivor:

They’ve written my story many times. Born in ’44 on a Mississippi cotton farm. Great-grandparents were freed slaves. Age ten, got good playing a two-string guitar made from a cigar box bolted to a canoe-paddle. At seventeen, hitched a freight train to Chicago. Got a job painting a record company office. A studio musician got sick, I filled in. Led to steady work with Muddy Waters. Got tired of Mud, so I formed my own band. We’ve played all over America and Europe. It’s a typical bluesman life of fame, fortune, misfortune, no fortune, little fortune.

Chaz meets the O’Malley sisters at the Manhattan nightclub Mim’s: first, music journalist Sarah, who’s looking for the story that will make her career; then, parolee Liz, who happens to be a self-taught savant on the blues guitar. When Chaz is stabbed while protecting Thelma, his own prized guitar, he taps Liz to replace him in his City Blues band. Nothing will ever be the same.

Richard’s skill in handling the complex twists and turns of his plot are matched by his ability to create memorable characters: from City Blues mainstays Kenny and Pearly to Ruby, the notorious guitar thief.

Fallen Fret is simply a great read, both for dyed-in-the-wool blues fans—who will certainly appreciate its insider point of view—and for any reader looking for a page-turner that’s a satisfying escape from the same old stories.