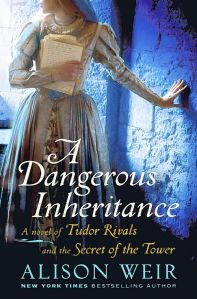 Time to pull out Rebecca Fraser’s The Story of Britain once again. I wanted to be sure I had my facts straight while reading the latest historical novel by Alison Weir, A Dangerous Inheritance: A Novel of Tudor Rivals and the Secret of the Tower.

I’m one of those people (and there are more than a few of us) who can’t get enough of the Tudors and their predecessors on the English throne, the Yorks and the Lancasters. Happily, Weir is similarly obsessed, even after having written a number of books about Henry VIII, the Boleyns, Elizabeth I, and earlier personages who played a part in British history of the fifteenth to seventeenth centuries, including the little princes in the Tower, the unlucky sons of Edward IV.

Weir is primarily a respected historian, but, since 2006, also a novelist. Her histories have a strong narrative, making them a pleasure to read; her novels are steeped in research. I imagine that she has turned to novelization when there’s enough history to build a good story but not enough for a nonfiction work—some judicious creative license is required to fill in the blanks between the facts.

But facts are paramount. You won’t find Weir writing a book like the one I spied at Barnes & Noble the other day: The Boleyn King, an “alternate history” novel that wonders “what if Anne Boleyn had given Henry IIIV a son?”

In A Dangerous Inheritance, Weir juxtaposes the stories of two young women separated by a century but united by perilous proximity to royal insecurities. Katherine Plantagenet is the bastard daughter of Richard III and remains loyal to his memory after his defeat at Bosworth Field. With royal blood in her veins, Katherine Grey is a potential threat to the early monarchy of her cousin Elizabeth (just as Katherine’s older sister Jane Grey posed a challenge to Mary Tudor’s ascendancy).

Weir lacks the extraordinary artistry of Hilary Mantel, who has mined the Henry VIII saga from Thomas Cromwell’s point of view and struck literary gold. But Weir tells a good story, filled with characters, settings, and details that abundantly satisfy an historical obsession.