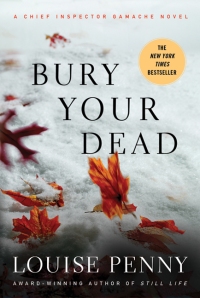 Je me souviens. Perhaps you’ve seen it on a Quebec license plate: I remember. I’d always thought of it as a perfunctory nod to history, like the Massachusetts slogan “spirit of America.”

Non. At least not within the context of Louise Penny’s 2010 Bury Your Dead, the sixth in her Inspector Gamache detective series.

Set in Quebec City, the novel explores the deep divide that exists between the minority Anglos and the majority Francophones. The French Canadians still remember the tragic 1759 defeat of Montcalm on the Plains of Abraham, which brought the entire province under British control. Some still dream of a separate Quebec, a French-speaking sovereignty carved out of Anglo Canada, fulfilling the independence movement that began in the late 1950s.

Je me souviens. In Quebec, the “remembering” is a fact of life. As Chief Inspector Armand Gamache asks, “Is the past ever really far from sight here?”

Gamache is currently on leave in Old Quebec, researching Montcalm’s downfall as a balm to memories of a police operation that resulted in the death of several of his Surété agents.

Then—another distraction: the Chief joins the investigation into the death of an amateur historian who was obsessively searching for the burial place of Samuel de Champlain. Gamache reflects:

That was the great mystery that hounded the Québécois. Somehow, over the centuries, they’d lost the founder.

They knew where minor functionaries from the early 1600s were buried, lieutenants and captains in Champlain’s brigade. They’d unearthed, and reburied, countless missionaries. The pioneers, the farmers, the nuns, the first habitants were all accounted for. With solemn graves and headstones, visited by school children, by priests on celebration days, by tourists and tour guides. Names like Hébert and Frontenac and Marie de l’Incarnation  resonated with the Québécois, and stories were told of their selflessness, their bravery.

But one remained missing. One’s remains were missing.

As if this weren’t sufficient pursuit of times past, an earlier case also plagues Gamache. Has he put away the wrong man? He sends Beauvoir, his second-in-command, back to the little village of Three Pines to re-investigate the death of the Hermit, the focus of The Brutal Telling. There, Beauvoir must deal with his own flashbacks to the event that caused such casualties for the Surété.

With Bury Your Dead, Penny skillfully expands her themes, introducing larger historical and social issues, imagining a crime of epic proportions. I was impressed with her ability to weave several narratives into a complex tapestry of past and present, remembrance and regret, brutality and compassion.

Despite the heavy subject matter, Penny manages to interject the occasional light touch. For example, at the scene of the historian’s murder, Gamache notices a man staring at him: “He stared for ten seconds or more, which, when eating a chocolate cake isn’t much, but when staring, is.”

And although Penny is apparently an Anglo herself, I think of these little asides—part of her signature style—as Québécois insouciance, flickers of candlelight amidst murky murder and memory.