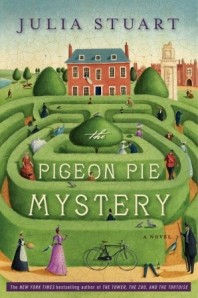 Glancing through The Pigeon Pie Mystery’s introductory cast of characters, I braced for that unique brand of peculiarity found only in British mysteries. The Countess of Bessington is described as a “parsimonious widow in perpetual mourning, with an addiction to ferns,” while Thomas Trout is “Keeper of the Great Vine, who strives to protect his mighty charge from being felled by rats.” There’s even a hedgehog named Victoria “with a penchant for beetles and Madeira wine.”

A promising beginning to the story of Princess Alexandrina, the beautiful daughter of the recently deceased (and previously deposed) Maharaja of Prindur. But I almost gave up after the first couple of chapters. I didn’t quite know what to make of the daft “mourning emporium” scene followed by a needlessly long exposition about how the socially savvy Mink has landed in such delicate financial straits.

Happily, I stuck with The Pigeon Pie Mystery long enough to appreciate just how much fun Julia Stuart is having in this zany tale of Victorian values and vanities. After Mink takes up residence at Hampton Court Palace as a “grace-and-favor” protégée of the queen—and tries to clear her maid Pooki of murder charges—the novel hits its silly and strangely entertaining stride.

It’s set in an era of elaborate conventions in everything from class relations and manners to social visiting and the language of flowers. Although her characters may take it all seriously, Stuart doesn’t.

“Mink heard the drawing room door open and hoped it was Cornelius B. Pilgrim. After thanking him for coming at such short notice, she spotted Pooki’s look of confusion as she closed the door. The Princess immediately saw the reason. He had failed to bring in with him his hat and cane as English etiquette dictated on a brief visit to a mere acquaintance, having left them in the hall as if he were a friend about to stay for luncheon.”

The Pigeon Pie Mystery is crammed with all manner of wackiness: bicycling enthusiasts and royal ghosts, day trippers who clog the palace and get lost in the maze, sartorial disasters and faux pas on the dance floor. No great revelations of truth or enlightenment, but an uproarious romp.

1 thought on “The Pigeon Pie Mystery by Julia Stuart”