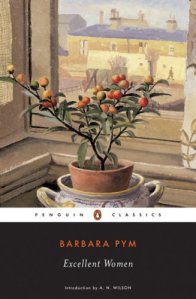 Excellent Women is, indeed, excellent: one of the most satisfying novels I’ve read in a while.

Written in 1952 and set in that dreary post-war period in London, it’s a first-person glimpse into the life of Mildred Lathbury: thirtyish spinster, daughter of a country clergyman, active in her High Church parish, friends with the vicar and his sister, part-time worker at an “organisation which helped impoverished gentlewomen, a cause very near to my own heart, as I felt that I was just the kind of person who might one day become one.”

When Mildred can’t sleep at night, she chooses between “cookery and devotional books, the most comforting bedside reading.” After her friend and flat mate Dora moved to take a teaching job, Mildred “looked forward to being alone once more,” believing that she was “now old enough to become fussy and spinsterish,” if she wanted to.

This might sound like the recipe for a terribly dull story—except that it’s Mildred’s story, told in Mildred’s voice. So it’s wonderful. Mildred is thoughtful and funny, observant and wise, incredibly self-aware of her own flaws and frailties, curious and cautiously caring about the people around her. Her reflections can be quietly hilarious, devastatingly insightful or, simultaneously, both: “It is a known fact that people like clergymen’s daughters, excellent women in their way, sometimes rush in where the less worthy might fear to tread.”

Mildred’s quiet life is subtly changed when the Napiers move in to the flat beneath hers: dashing Rocky has just returned from service in Italy, where all the Wrens fell in love with him; Helena, his wife, is an anthropologist (a novelty in that era) who’s more interested in her colleague Everard Bone than in her wifely duties. To Mildred’s surprise, they take to her, inviting her to tea and meetings of the Learned Society—but they also take advantage of her, a bit, and she is aware of that, too.

Pym’s writing is so clever and affecting, I began dog-earing pages at the beginning and kept right on doing so to the final scene. An example that characterizes the book’s tone finds Mildred and Everard discussing the type of woman he would marry:

‘Somebody who would help you in your work?’ I suggested. ‘Somebody with a knowledge of anthropology who could correct proofs and make an index, like Miss Clovis, perhaps?’

‘You could consider marrying an excellent woman?’ I asked in amazement. ‘But they are not for marrying.’

‘You’re surely not suggesting that they are for the other things?’ he said, smiling.

That had certainly not occurred to me and I was annoyed to find myself embarrassed.

‘They are for being unmarried,’ I said, ‘and by that I mean a positive rather than a negative state.’

Mildred knows she is one of those excellent women, too, who make the tea and gather items for the church jumble sale. Instead of chafing against this quiet existence, she embraces it, finds humor in it, constructs meaning from it.