GUEST REVIEW: In addition to adventuring around the nation’s capital, fellow blogger Discover DC Living is an avid reader, from history to mystery. She also follows several series—different ones than I do—including Rhys Bowen’s Her Royal Spyness. She kindly shared her recent review of Naughty in Nice, an entry in that series. 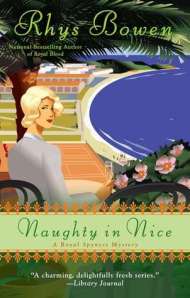 Naughty in Nice is the fifth in the “Her Royal Spyness” mystery series. Lady Victoria Georgiana Charlotte Eugenie, or Georgie, is the brother of the Duke of Rannoch, Binky. She is directly related to the Queen of England. And she is dirt poor.

Georgie is attempting to make it on her own in London in the 1930s, admittedly a terrible time for anyone who is not fabulously wealthy. In preceding books, she has tried to branch out on her own in different fields, including retail and housekeeping. Both were miserable failures. She has, however, shown a talent for being inadvertently in the middle of murder mysteries. Luckily, she can call upon her grandfather, a retired London bobby, in a pickle.

This time, Georgie has been summoned by the Queen and told that she needs to report to Nice to guard some jewels that are being loaned to Coco Chanel. Unfortunately, she seems destined to stay with her horrid sister-in-law’s even more awful family in a terrible rental home far from the beach. Happily, Georgie’s socialite mother swoops in in the nick of time and spirits her away to a mansion on the coast.

As luck would have it, there is not only a murder, but a high profile theft as well. Of course, Georgie is smack in the middle of the whole affair. Who can she trust? Will she be locked up in Nice? Will her unpredictable paramour save the day? And who killed her neighbor and swiped the Queen’s jewels?

A philosophical, world-altering, enlightening book this is not. However, as a book read purely for escapism and enjoyment, perhaps on a late summer day, this succeeds quite well. The subject matter is dealt with lightheartedly, and the story is spun logically and intelligently. Although—having read all the books in the series—I might be biased.

I have grown attached to Georgie and her friends and family. I also like the formulaic way the story is laid out. While the general plot outline is similar (Georgie goes somewhere, someone dies, she figures it out through deduction and danger, the police make an arrest), the precise mystery is never the same twice. So far, Georgie has investigated ghosts, vampires, witches, philanderers, and communists.

I look forward to reading more about Her Royal Spyness. Where will she land next? And who will meet an untimely end? Hopefully not Georgie!