Your wealthy great aunt dies and leaves you…not a fortune, but an all-expense-paid vacation: three weeks as a houseguest at Austenland, “where the Prince Regent still rules a carefree England.” If you love Jane Austen, and Mr. Darcy, and Colin Firth as Mr. Darcy, this might seem just as perfect for you as it does for our heroine Jane Hayes. 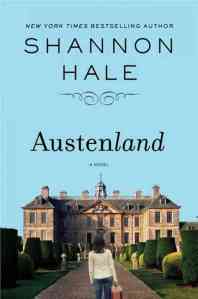 Jane’s had a string of bad romances—briskly outlined by author Shannon Hale at the opening of each chapter—but her biggest problem (so she believes) is being stuck on the fantasy of the ideal man as set forth in Pride and Prejudice and more specifically its BBC manifestation. She’s ready to jettison those well-watched DVDs and any remaining hope for romance; this trip “back in time” couldn’t be more well-timed.

Corseted, bonneted, and be-ribboned, Jane is whisked off in a carriage (“A carriage! She thought.”) to a “stately Georgian manor” to play at being a lady of 1816. She meets a Bingley-esque Colonel Andrews and a Darcy-esque Mr. Nobley.

They wore the high-collared vests, cravats, buttoned coats with long tails, and tight little breeches that had driven Jane’s imagination mad on many an uneventful Tuesday night. Her heart bumped around in her chest like a bee at a window, and everything seemed to move in closer, the world pressing against her, insisting that all was real and there for the touching. She was really there.

Jane’s heart beat impatiently. A ball—things happen at a ball. Cinderella happened at a ball. Jane might happen. She felt hopelessly and wonderfully fanciful. The sun on her face, the bonnet ribbon under her chin, the wrap around her arms, and a hatted- and sideburned-man at her side, all lent itself to perfect suspension of disbelief.

But there’s also confusion between what’s real and what’s make-believe as Jane inserts her very real emotions into life in a theme park.

But still, an “Austenland” vacation spot is a fantastic idea, and I give Hale great credit for dreaming it up. I’m glad, too, that she saw fit to include my own favorite “ideal man” in her cast of characters—Captain Wentworth, the hero of Persuasion, specifically as portrayed by Ciaran Hinds in the 1995 film (that I’ve watched perhaps one or two times too many).

Would I want to visit Austenland? I don’t think so. I’m not sure I’d want to trade my jeans for an Empire waist gown. Would you?

We’ll have a chance to jump from novel to film, anyway, when Austenland the movie opens in September. I’m glad I read the book first, but I may also watch the film. After all, it may introduce us to another ideal man.