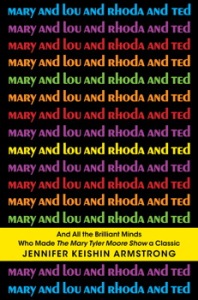 Who can turn the world on with her smile
Who can take a nothing day,
And suddenly make it all seem worthwhile?
Well, it’s you girl, and you should know it
With each glance and every little movement,
You show it…

Love is all around, no need to waste it
You can have a town, why don’t you take it?
You’re gonna make it after all…

As I opened this book, the once-familiar theme song was already spinning in my head—as Mary Tyler Moore herself spun around on the opening credits of her show, tossing her beret in the air.

What a revelation The Mary Tyler Moore Show was to my junior-high-school self: here was an intelligent single woman (not a girl—despite the

lyrics—or a genie) living in a regular city (not NYC or LA), in a tiny (but cute!) apartment, with an actual occupation (neither housewife nor mother), and convincing life challenges (man troubles, sure, but also lots of other issues).

Jennifer Keishin Armstrong has written an interesting cultural history about the rise and fading away of this classic 1970s comedy. Although, obviously, Moore and her TV executive husband Grant Tinker are central characters—and there are plenty of anecdotes about the rest of the memorable cast, too—Armstrong delves beneath the surface to document how the show emerged from the creative visions of its first writers, producers, and directors, and even its casting director and costume designer. She documents how the show benefited from a growing feminist sensibility, helped champion more opportunities for women, and also diverged from more radical forms of feminism.

Many individuals launched, or significantly advanced, their careers with TMTMS: actors such as Valerie Harper and Ted Asner, and probably most notably, one of the original writer-producers, James L. Brooks, who continued on to films (Terms of Endearment and one of my favorites, As Good As It Gets) and then to The Simpsons.

Brooks, along with fellow creator-writer-producer Allan Burns, sought out women writers to make Mary Richards “one of the most authentic, and emulated, female characters to ever hit television.” The first were Treva Silverman and Susan Silver—whom Armstrong profiles in some detail—but there were dozens who, together, “disprove[d] the long-standing belief that women weren’t funny.”

The Mary Tyler Moore Show was a character-driven sitcom, an innovative concept at a time when most comedies were still written around funny “scrapes.”

Brooks and Burns . . . instead pursued a loftier idea of what a sitcom could be. They resisted Mary engaging in zany antics just for a laugh. She would not stomp grapes or get mixed up in the chorus line at the Copacabana. They would start with a relatable premise and assume reasonable intelligence on the part of Mary as well as most of her supporting characters. They wanted to present plausible people who reacted in believable ways. Sometimes, they hoped, they would also make viewers laugh.

One of the surprises in reading Armstrong’s book is discovering how nice the MTMS people were. She recounts many episodes of human kindness: producers who took chances on unknown writers, cast and crew looking out for each other. And there’s a charming story about a Rhode Island fan’s reception when he trekked out to Hollywood for a visit.

All good things have to end, and the book’s closing chapters are bittersweet. Many of the people involved with the show—whether their careers chugged on or fizzled out—have recognized that being a part of such a unique and ground-breaking experience was a not-to-be repeated moment in their lives.

While the show went off the air in 1977, it’s still touted as an inspiration by many in show business and was named “best TV show of all time” by Entertainment Weekly in 1998. Armstrong cites Tina Fey as one of Mary Richards’ “cultural daughters”—skilled in sketch-comedy writing, Fey watched episodes of the sitcom to teach herself how to write for 30 Rock.

I’m not sure how meaningful Mary and Lou and Rhoda and Ted would be for readers who’ve never laughed at and with Mary and Lou and Rhoda and Ted and the rest of the cast, but I enjoyed it cover to cover. A stroll down memory lane, to be sure, but also a thought-provoking exploration of where we were in the 70s and where we are today: as seen on TV.