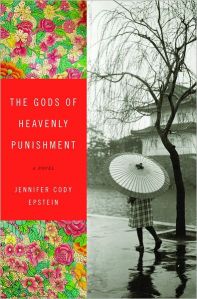 I love history and I love fiction; so I should read a lot of historical fiction. But it can be a challenge to find good examples of the genre: satisfying as story, imaginative in style, enlightening as historical account.

The novel’s central event is the US firebombing of Tokyo—an attack considered the deadliest air raid of World War II, killing more than 100,000 on the single night of March 9−10, 1945. Epstein sets one of her main characters, sixteen-year-old Yoshi, in the middle of it, experiencing the horror of the bombs as they descend, “slow as dreams, bright as water.” And as they set men and women, boys and girls, houses and whole neighborhoods ablaze: “a booming flash, a roar so deafening that the screaming world went quiet.”

Epstein propels her story toward this terrible night—and then beyond it—by introducing a small set of characters, both Japanese and American: as they were before the war, and who they eventually become as the conflict overshadows their lives.

We first meet Yoshi as a six-year-old, the cherished daughter of Kenji, a prosperous builder, and Hana, his enigmatic wife. There’s twelve-year-old Billy, who’s just discovered that he loves to take pictures with his Brownie camera, and his architect father Anton. And Cam, the New York farm boy who dreams of being a pilot. In deft scenes set in Japan, Manchuria, and the U.S., Epstein conveys her characters’ virtues and flaws, hopes and fears. She has a gift for knowing when to be generous with the details— Japanese dialect, meaningful metaphors, exquisite descriptions—and when to leave something to the reader’s imagination.

I found myself thinking about Epstein’s characters and their circumstances while at work and on my daily walks; I wanted to return to the novel and find out what happened to them. In historical fiction, it’s the characters—whether based on real figures or imagined into history—who persuade us to journey back in time, to accompany them in bearing witness to the past.

But, with the book back in my hands, I usually slowed myself down to savor the words, because Epstein is a fine stylist, whether she’s describing a scene or an interior landscape. One character’s impression of his lover, for example, is so precisely drawn, even as it evokes someone unknowable:

But even at her most passionate, there was always a sense…that something was missing; something that had either been stripped from her or plucked out by her own will, or maybe never had the chance to form in her at all. She was beautiful, and startlingly intelligent, with a caustic sense of humor that could make him laugh until his gut hurt. She was the most uninhibited woman he’d ever slept with… But there was something in her extremism that felt almost nihilistic; as though sex were a way of punishing herself. And she could say things that sent chills up his spine.

One of the most heart-wrenching passages, for me, is what pilot Cam Richards observes from the cockpit of his fighter jet, the Blonde Bombshell, as he flies over Japan on a mission in 1942:

Then the [shore]line was behind them, the fine white grains sifting into what looked like an enormous checkerboard from some green-painted Wonderland. Farmhouses of silvered wood squatted atop rice fields. People came and went carrying tools and bright cloth bundles and more children. As the Bombshell made its roaring way overhead, some of the farmers took off their straw hats and waved them back and forth slowly, as though pointing the way to Tokyo. Cam saw kids climbing peach trees—the girls with beribboned braids, the boys with little military-style buzz cuts, all of them waving, waving, waving. He wondered why they weren’t in school. He wondered what they learned when they did go, whether it was just like what he’d learned, but in Japanese.

This scene truly captures what is at the heart of The Gods of Heavenly Punishment: the human-ness to be found, and to be grateful for, beneath the inhumanity of war.

War lets us blot out what we know of right and wrong, encouraging us to wallow in prejudice, to justify inhumane thoughts, crude words, and obscene actions. But Jennifer Cody Epstein reminds us that this ultimate human tragedy can also open our eyes to empathy and compassion, if only we know where to look.